The Nubira was introduced in 1997 as a replacement for the older, Opel based-platform of the Daewoo Nexia/Cielo, and the Italian I.DE.A designed it. Institute.

While the rest of the range was closer to the mid-size segment, the 5-door hatchback aimed clearly into the compact-segment. It was, probably, one of the biggest challenges for the Korean carmaker to make its way into the European market. Unfortunately, Daewoo's financial situation didn't become better, and, eventually, it filed for bankruptcy and ended up being bought by General Motors.

Nubira featured a biodesign-inspired styling from the outside, with not a single straight line on its bodywork. Its headlights were horizontally mounted but with rounded edges. Its sideline was identical to the sedan version up until the C-pillar, including the doors. It was an economic decision that made the car looks like it was missing a trunk.

Daewoo offered the car in 6 different trim levels: SE, EuroSunHatch, SX, SE, X-Series, and CDX. The SE's standard features included a radio and cassette player with a 4-speaker sound system, A/C, and central locking. While the SX was not equipped with A/C, it had a 6-speaker sound system, CD player, and powered windows.

The CDX trim level added alloy wheels, and the interior trim was upgraded. The Nubira EuroSunHatch featured a folding sunroof that extended to the rear passenger seats. Safety-wise, the only available systems were the front airbags and ABS. Overall, the car offered fair options for its price. 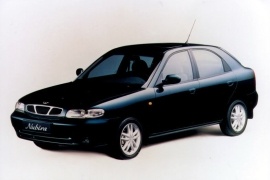