The Nubira was first launched in 1997 and was produced until 1999, and it was a replacement for the aged Daewoo Nexia/Cielo.

The Korean carmaker was rising, and its sales in the East European countries were rocketing. But soon, the customers started to ask for more, and the old Nexia/Cielo was no longer a trustworthy option.

It was developed as a replacement for the Opel based-platform Daewoo Nexia/Cielo and was designed by the Italian I.DE.A. Institute. Technically a compact, its exterior size is close to a mid-size sedan, while the station wagon was clearly out of the compact-segment due to its length. "Nubira" comes from a Korean expression meaning "to go anywhere."

Its design was not the most appealing, but it was decent for those times. The car was produced as a 4-door sedan, a 5-door hatchback, and a 5-door station wagon. It was available with 1.6-liter and 2.0-liter gasoline engines. The customers could choose between a 4-speed automatic or 5-speed manual transmission.

The Nubira came with six different trim levels: SE, EuroSunHatch, SX, SE, X-Series, and CDX. The SE's standard features included a radio and cassette player with a 4-speaker sound system, A/C, and central locking. While the SX was not equipped with A/C, it had a 6-speaker sound system, CD player, and power-windows.

The CDX trim level added alloy wheels, and the interior trim was upgraded. The Nubira EuroSunHatch featured a folding sunroof that extended to the rear passenger seats. Safety-wise, the only available systems were the front airbags and ABS. Overall, the car offered fair options for its price. 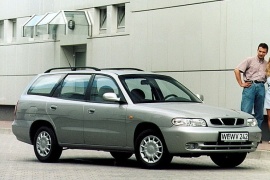