The Korean car was the tiniest in the small car segment, however, it was still in a 5-door shape.

While it was short in length, there Matiz was pretty tall, offering plenty of headroom, as well as a comfortable driving position that gave the impression of a car in a larger class.

Decent amount of headroom and legroom in the back, as well as a decent load area was offered. The trunk space could be extended by folding the rear seats.

The cabin of the Matiz was smart and practical, however, nothing daring.

The Matiz was not a pocket rocket, and was hiding under the hood a 800 cc engine that developed 50 hp.

Designed to be a city car, the Matiz had a good handling. It was not the car to take on the motorway though, as the journey would have been rather noisy than pleasant.

The base model offered a power steering and twin airbags.

The Matiz was the ideal car for people on a tight budget or as a second car, as it was a good package at an affordable price. It even offered a 3-year warranty.

Later in 2000, Daewoo decided to make a number of changes to the tiny Matiz, such as redesigning the headlamps, reworking ABS, adding a stainless steel exhaust as well as revising the mounting points of the engine to achieve a quieter car. 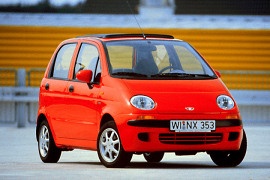