Daewoo expansion in the European market was based on a licensed production for the older Opel Kadett, but in 1994 the Korean car-maker introduced a restyled version: the Cielo/Nexia.

Due to copyright issues, the car was named differently in various markets where it was sold. The contract with the GM allowed them to use only one engine choice, which was improved over the years. But the aged platform and outdated interior made it a poor choice for the European customers. It was still under production when Daewoo filed for bankruptcy.

The exterior lines resembled those of a Kadett, but with smoother lines and narrower headlights. From the sides, the curved body and door panels were similar to the ones used before, but the door-mirrors were painted in body color. The Nexia/Cielo was offered as a 3- and 5-door hatchback or a 4-door sedan. Daewoo didn't have the right to built the station-wagon version of the Kadett.

Inside, there was a simple design layout with four dials in the instrument cluster with a center-mounted speedometer. On the center stack, there were the radio-cassette player and the climate control knobs. For upper trim levels, it was available with an AC-unit. Despite its short wheelbase, it offered enough legroom for the rear passengers.

Under the hood, Daewoo installed a 1.5-liter engine with multipoint fuel injection. Previously, the same engine was fed by a single-point system. It was mated to a 5-speed manual gearbox, and a 3-speed auto was offered as an option. 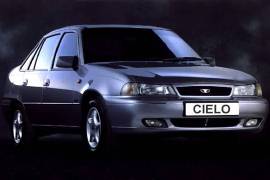