After Renault bought the Dacia carmaker, it needed to develop new products based on the existing ones to help the factory survive on the market.

In 1995, the Romanian carmaker introduced its first new model in over 30 years of existence. It was named Nova, and it was a hatchback. It was designed from scratch by the Romanian engineers and served as a platform for the following models developed together with Renault. The first step was to install a new drivetrain, with a Renault Clio engine and gearbox for the SuperNova and, in 2003, Dacia introduced the Solenza.

The Solenza featured angular-looking headlights, narrower on the inside, and a V-shaped grille. Depending on the trim level, it featured fog-lights in the front bumper, light-alloy wheels, and a small wing on the trunk lid. The side strips, door-mirrors, and door handles were black.

Inside, the carmaker installed cloth seats and cranked windows on the base models. The upper trim levels benefited from air-conditioning, a CD-stereo, and power-windows. Its dashboard was molded from plastic and featured an extended instrument cluster that covered the audio system area. The car offered a folding bench in the back, which was good to expand the otherwise very small trunk.

Under the hood, Renault installed a choice of two engines: a 1.4-liter gasoline and a 1.9-liter naturally aspirated diesel. For the latter, the customer could order the car either with air-conditioning or with power-steering. There was not enough room under the hood to install both of them. 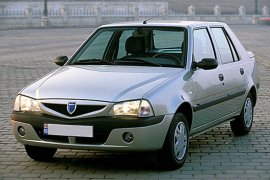