The second generation of the Dacia Sandero was introduced in 2012, and, in 2016, the entire lineup went through an ample facelift.

With a crossover market growing day by day, Dacia offered a lifted version for its small-segment hatchback, the Sandero. Due to its low weight and efficient engines, it was a good offer for those who searched for a low-budget car that could go over unpaved roads and still get good fuel-efficiency.

Like most of the facelifts, the Sandero Stepway received a new front fascia. The LED daytime running lights were included on the options list. The front bumper was inspired by the Duster, the light SUV built by Dacia. The designers installed a silver plastic shield under the front bumper and a pair of fog-lights on the sides. A three-squared lighting signature was introduced in the taillights. On top of the vehicle, a pair of roof-rails carried-over from the station wagon version (named MCV) was fitted as standard.

Inside, the Sandero Stepway featured a dedicated upholstery, with the “Stepway” name embroiled on the front backrests. An important step forward was for the infotainment unit, named MediaNav, Android Auto, and Apple CarPlay compatible. There was limited room for two adults for the rear seats, but it was enough for the city or short trips.

Under the hood, Dacia prepared a choice of three gasoline and diesel engines with power ranged between 90 hp and 95 hp. All versions were paired as standard with a 5-speed manual transmission, while a robotized, single-clutch gearbox was on the options list. 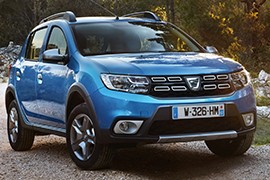 4 This Automaker Says It's Not Firing Anyone, but Employees Get Over $27,000 if They Leave