The second generation of the Dacia Sandero was unveiled in 2020 in an offline event along with the Logan and the Sandero Stepway.

The Romanian car-maker Dacia was part of the Renault Group before the Renault-Nissan alliance was formed. Introduced in 2007, Sandero's first generation accounted for more than 2.1 million units sold for the Dacia brand.

Dacia designed the Sandero as a small-class vehicle for urban environments. Its styling was different than the Logan, but it was built on the same platform. The Y-shaped LED daytime running lights and the wider fenders made the car looks more prominent than it was. A hexagonal, 3D mesh grille design was installed to amplify the car's width. A lower A-shaped grille with the radar system enclosed completed the front fascia. In the back, the car looked rather dull without any significant element to show. A premiere for the Sandero introduced the factory sunroof; an option never met before for the Romanian brand.

The interior design team worked hard and brought smart solutions for the customers. On top of the dashboard, smartphone support with a lid on top of the dashboard plus a USB connection transformed the driver's personal mobile phone into a media control unit. The top of the range version featured a Media Nav system with wireless integration for Apple CarPlay and Android Auto. Due to the longer wheelbase than its predecessor, the Sandero offered more legroom for the rear passengers.

At the time of its launch, the Sandero was available with a choice of three engines. The base version featured a 1-liter, three-cylinder unit. A turbocharged 1-liter unit powered the mid-level, and the top version was the 1.0-liter bi-fuel (gasoline-LPG) engine that developed 100 hp. 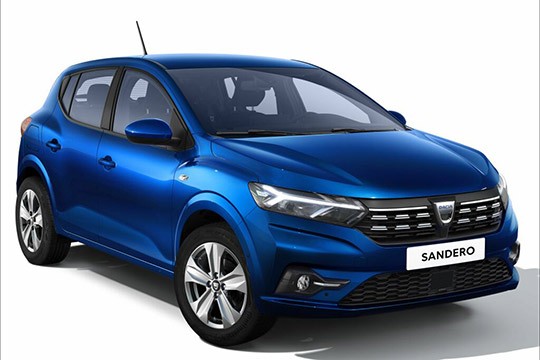