Offering the best value for money in the small car class, the Dacia Sandero received an update for 2016, including a restyled exterior design and more added technology.

Restyled to look more modern, the Sandero had slimmer headlights that were integrated in the grille and the lower air intake was refreshed to offer a more aggressive look.

A choice of three engines was available with the Sandero, a 1.2-liter with a sharp throttle response that was best around town, a 1.9-liter that might have felt a little sluggish and a 1.5-liter diesel.

To offer such a practical car for such a low price meant compromise. And the compromise could easily be noticed inside the Sandero’s cabin. The quality of the materials used for the old-school interior was rather poor, however, they were well put together.

The base version did not offer much in terms of technology, not even a radio. However, the upper trim levels offered a functional infotainment system with Bluetooth connectivity.

The cabin was a little noisy, and so were the not-so-refined powerplants available. The suspension did struggle a little through potholes.

Even with these downsides, the Sandero was still the best option out there for the money. And we’ve already mentioned that practicality was a strong point, and here’s why: the roomy cabin offered great room for all occupants, with great legroom, headroom and shoulder room.

As far as the cargo area goes, no other car in the class could offer the 320 liters of storage the Sandero did. And even up two 1200 liters with the seats folded.

Not to mention, the Sandero had low running costs, featured fuel efficient engines and reliability was not to question. 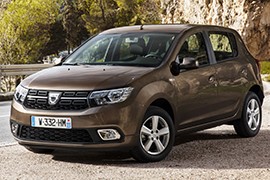