By 1997, Citroen was already forced to desperate measures to increase the global XM sales and introduced a second and final facelifted version.

When it was introduced in 1989 as a replacement for the CX, it was a revolution that fired up the market, and it became an instant success that lasted for a year and a half until the technical issues started to spoil the car's image. The French carmaker introduced a facelifted version in 1994, but without solving the technical problems. From there on, the XM's sales went down. In 1997, Citroen made a last facelift for the entire XM range, including the station wagon.

For the 1997 version, the French didn't want to pay anything to the original designer, Bertone, and decided to keep the car as it was. Thus, the carmaker didn't spoil the XM's look. For the station wagon version, Citroen kept the same tall tailgate and smoked taillights. To justify their money, the design department offered a choice of new hubcaps.

With an increased demand for safer cars, the carmaker found a smart way to convince its customers by introducing side airbags for the XM. The decision was right, in terms of safety but not in terms of sales. Citroen found itself in an even more difficult situation, but it still didn't fix the Hydractive II suspension that made so many cars failing on the roads.

If the design and safety couldn't make the car sell better, Citroen thought that more power would do the trick. It installed a new 3.0 V-6 engine under the hood. The XM was sold in smaller numbers than the company hoped for, and it was axed from the assembly lines in 2000. It was already an old vehicle, by those times standards. 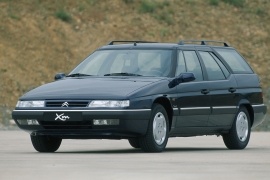