In 1994, Citroen introduced a facelift for its flagship range, the XM, and along with the "Berline" version, it upgraded the station wagon as well.

Citroen had high hopes for the XM, and those were not achieved by 1994 when the lineup was refreshed. Even though it was all the necessary attributes to become a best-selling model, its sales figures were below expectations.

The carmaker employed Bertone Studio to design the car, and the final result was an unusual-looking vehicle with straight lines and abrupt angles. The 1994 model-year featured a new grille with two larger gaps than its predecessor. A long, sculptured line crossed the vehicle from headlights to taillights, and the carmaker installed the door handles in that. At the back, the step over the rear door panels made a connection to the trunk area and rear quarter panels.

Inside, the dashboard design was completely changed. While the non-facelifted version featured angular lines, which were on the same page with the exterior, the 1994 model sported rounded shapes. Moreover, the carmaker installed dual airbags to increase passengers' protection.

Under the hood, Citroen offered a choice of five engines ranged between 110 hp and 170 hp. The latter was the PRV, 3.0-liter V-6 gasoline unit developed together with Ford in the late '70s. 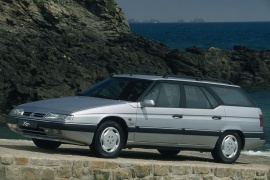