At the beginning of the '80s, Citroen needed a car to compete in the European compact class.

In time, its dimensions downgraded the car into the small class. It did it with a Peugeot-based hatchback named Visa.

The Citroen Visa was created to replace the Ami, which was launched in 1961 and it was already old. Its design was not suitable anymore for a market that discovered the hatchback bodywork and its advantages, from the Renault 16. The first generation of the VW Golf appeared in the '70s.

The Visa was built on the same platform as the Peugeot 104. The wedged shape vehicle featured twin-round headlights and a grille with horizontal slats between them. An additional grille was incorporated under the bumper, to improve the cooling of the air-cooled engine.

The five-door bodywork offered enough room for five adult passengers and an average-sized trunk. As a strange feature, the hand-brake was for the front wheels and the spare-wheel was placed on top of the engine. Depending on the trim level, the Visa was offered with a stereo and a rear wiper.

Under the hood, the Visa was offered with a choice of gasoline or diesel engines. The former was offered with either a twin-cylinder or a flat-four, while for the latter only a 1.6-liter naturally aspirated diesel was available. 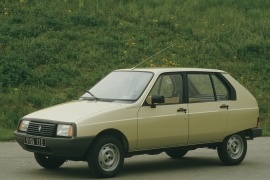