Citroen tried to develop a new vehicle to replace the aging 2CV, and the Visa seemed to be the perfect answer for that.

In some way, it did, since it managed to sell in high numbers and in a few shapes.

By the late '70s, Citroen already knew that the hatchbacks were on the rise. Volkswagen already proved that with the boxy-looking Golf, and Honda also did well with the Civic. The French brand, on the other hand, relied on the Ami lineup to compete in the segment, and it was not doing it too well simply because that car had an unusual, rather ugly, design. And then, the Visa came.

Even though it sported a boxy design, the narrow front end, and the slightly curved body panels were a delight, at least compared to the Ami. Moreover, the carmaker ditched the oval-shaped headlights and replaced them with rectangular ones. Due to the fact that it featured air-cooled engines, it didn't need a large grille, so a smaller one was put in place. From the sides, the four-door version featured flush door handles. At the back, the raked-forward tailgate allowed for easy loading of luggage into the trunk.

The interior was cramped for the rear seats but very generous for the front passengers, thanks to the small engine placed in front of the gearbox. An unusual dashboard design led to a pair of side stacks next to the instrument cluster, one of them featuring the turn signal switches.

Under the hood, the carmaker placed a small range of flat engines, starting with a two-cylinders. As an option, the carmaker added a flat-four powerplant that provided an even better fuel efficiency than its smaller displacement engine. 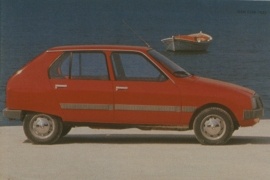