Citroen revised the Saxo lineup in 1998 and tried to offer the three-door version with different spices than the five-door, family-oriented version.

The Saxo was a badge-engineered Peugeot 106, which, in turn, was based on the Citroen AX platform. In 1998, Citroen unveiled a facelifted version for the smallest member of its family. That led to a slight increase in sales over the 1997 figures. The sales fell under 100.000 units per year only in 2003, when the car was ready to leave the market and made room for its successor, the C2.

At the front, the 1998 model featured different headlights with curved lines instead of the angular ones from the 1996 model. The grille sported a wider opening, like a smiling face, with the "double-chevron" chromed badge enlarged in the middle. In the three-door version, Citroen re-named the little Saxo as VTS and offered it only with gasoline engines, including a sportier version. In the back, the carmaker mounted a roof-spoiler at the tailgate's top to show its commitment to motorsport.


Inside, the main difference was the new steering wheel with a three-spoke design and an airbag. The non-facelifted version sported a two-spoke design. Citroen didn't see any reason to change the rest of the dashboard design, which featured rounded lines and triangular-shaped vents. For the 120 hp VTR version, the carmaker installed white-dials instruments.

Under the hood, the French carmaker installed a choice of three engines. The base version was a 1.4-liter gasoline unit, while on the other tip of the scale stood the 1.6-liter, 120 hp engine that transformed the little super-mini car into a true hot-hatch. 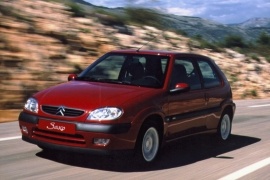