The DS was one of the most revolutionary cars ever made.

Citroen launched it in 1955, but its evolution didn't stop there. In 1973 the model received the most advanced version: the DS23.

After a few facelifts, the DS came to its final evolution in 1973. Its original designer, Flamino Bertoni, didn't live long enough to assist with that, but the evolution brought the puzzle's final piece, which made the car even more desirable.

While the initial model featured exposed, round headlights, the latter evolutions brought the covered headlights with the inside's directional lamp. The aerodynamic shape was kept, and it still looked more advanced than most of the cars on the market due to its fluid lines and sloped short back.

Inside, the DS, and especially the top-trim level DS Pallas, featured wide seats at the front and a bench in the rear. Due to its long wheelbase, there was plenty of room for five passengers. Worth mentioning that Citroen designed the car so France's president, General Charles DeGaulle, could fit in, and he was 1.96 m tall (6.4 ft).

Citroen installed a new, 2.3-liter engine under the hood, either with a carburetor or with a fuel injection system. The latter was a novelty on the market, and people were still skeptical about its reliability and performance. But the 15 hp difference between the two engine choices and its lower fuel consumption proved its value. Both versions were paired either with a 5-speed manual or a 4-speed semi-automatic gearbox. 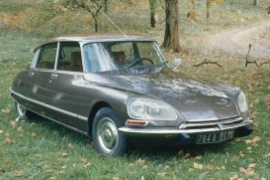