It took a keen eye for details to distinguish a C5 2008 from the facelifted version, which was introduced just two years later in 2010.

Citroen was one of the carmakers that replaced its mid-size sedan during the world economic crisis, and its finances were heavily hit when the global car market shrunk. But the French manufacturer didn't lose its temper and came with a facelifted version in 2010, improving the technology behind the car, while its resources for the exterior were limited.

At the front, there was a slight difference between the LEDs for the daytime running lights with a clear appearance and the new headlights, which looked almost exactly like the previous ones. The main exterior difference was at the back. The carmaker replaced the taillights, and the new version featured a clear, white, middle horizontal section, while the 2008 model featured a darker, red area for that segment.

Inside, Citroen offered a new option named eTouch, which brought the virtual maintenance manual and an Eco-Driving service accessible via the MyCitroen personal area on the web. There was also a new infotainment unit as an option.

On the technological side, the 2010 C5 featured revised engines and the micro-hybrid technology with an advanced start/stop system. That one was installed on the 110 hp turbo-diesel engine paired to a six-speed automatic gearbox. It was an industry first since most carmakers couldn't offer a start-stop system with an automatic transmission. For the gasoline units, Citroen introduced the 1.6-liter turbocharged developed together with BMW. 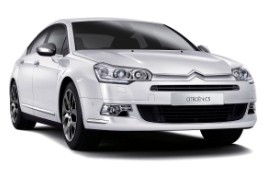