Citroen refreshed the first C5 generation in 2004, and the changes went further than just new wheels and paints for the bodywork.

Citroen prepared itself to comply with the following Euro 4 emission standards and refreshed the C5 lineup. Apart from a new engine, the carmaker introduced a new generation of the Hydractive technology that made the Citroens so special on the market with their smooth, comfortable rides.

For starters, the car was longer due to the thicker bumpers. At the front, there was a new apron and slatted grille flanked by new round fog lights. The carmaker made the badge bigger and extended on the hood with chromed slats. New, boomerang-shaped headlights replaced the older, tear-shaped ones and were available with an option for swiveling directional system. Unlike other carmakers, Citroen heavily worked at the back of the car and changed the rear quarter panels, the bumper, and tailgate to accommodate the new L-shaped taillights.

Inside, the carmaker worked more on details. The instrument panel received silver dials for a sportier look. Also, on the center stack, the carmaker introduced an option for a more powerful infotainment unit.

But the most significant changes were under the hood, where the engine lineup was enhanced by a new, 1.6-liter turbo-diesel, which offered the same power as the previously used base version of the 2.0-liter HDI. 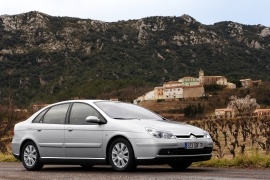