The expansion of the midsize car market in the late '90s convinced French manufacturer Citroen to launch the C5 range in 2001.

It was built to replace two vehicles from Citroen's range: the Xantia and the bigger XM. Big enough to host five adults and a big trunk, it offered 8 engine variants developing between 90 hp and 207 hp. It was only front-wheel-drive and its main advantage was the air suspension.

The big headlights were an important upgrade over the previous midsize station wagon, the Xantia Break, which had rectangular small front lights. Another important improvement was on the suspension side, with the introduction of the Hydractive III system. This was able to hold the car's ground clearance at the same level regardless how much weight was loaded into the vehicle. It wasn't exported in the North American market.

The biggest engine available was a 3.0-liter V6 gasoline, mated to a standard 6-speed automatic gearbox. Other versions had manual transmissions with 5 or 6 speeds. The diesel range was also important in that period, and engines with a displacement between 1.6 liters and 2.2 liters were installed with power ranging between 90 hp and 170 hp.

A major facelift was made in 2004 when the option of directional headlights was introduced. Citroen was the first mainstream car manufacturer in the world to install adaptive headlights in a car, in the original, 1955 Citroen DS. 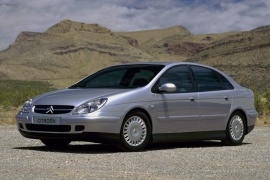