Some car-makers are building some specific cars for specific markets if there is a need for a specific type of vehicle.

It was the same situation with the 2007 Citroen C4 Sedan.

In Europe, Renault built a 3-box 5 model for Portugal and Spain, two generations of the Clio was also offered in sedan form and Peugeot offered an Iran manufactured 206 Sedan on some markets. The list might go on with other examples. The Citroen C4 was already a known car in Europe and other continents. Not on the North American market, where the French cars were not so appreciated.

Citroen launched in 2007 a sedan version for the C4 hatchback. It was produced initially in China, at the Dongfeng factory and then, it was spread in other European countries and in South America, specifically for the Argentinian market. The French manufacturer built the car in Argentina. It featured a similar design up to the C-pillar and then it added a trunk behind. Although it looked very weird, with vertical taillights, the concept worked. There were some countries where the buyers didn't like the hatchbacks, but they were eager to grab a sedan.

Inside, there were more similarities with the hatchback version, but with obviously lower-quality materials. Since the car was built for countries with lower purchasing value, the car had to be more affordable. Some short-cuts had to be done on some materials and engines.

On the South American market, the C4 Sedan was offered with a 1.6-liter gasoline engine, mated to a standard 5-speed manual. In Europe, it was available also with a 1.6-liter turbo-diesel engine. 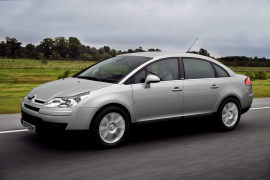