The Citroen C4 Cactus crossover was launched in 2014 and its styling was not quite popular.

The French manufacturer tried to fix that with a major facelift in 2018.

The car-manufacturers adapted fast for what the market asked for. And the market asked for crossover vehicles instead of station-wagons. Even some hatchbacks were ruled out by the new trend in automotive design. The C4 Cactus came with a nice offer of higher ground clearance but with the dimensions of a small vehicle.

Citroen always had a different approach to car design. They didn't follow the trend and, sometimes, that paid off. The 2018 C4 Cactus had a raked front fascia, compared with the non-facelift version that had a bold, almost vertical, front end. The DRL lights were mounted above the headlights, above the beltline.

Inside, there was room for five adults, and, due to a flat rear floor, it was easy to fit three people on the backseat. The trunk was rather small, but the rear seats featured folding backseat in a split 60:40 mode. The 2014 Cactus was in one piece. Unusual for the rear doors were the pop-out hinged windows. They couldn't be rolled down, but just open slightly outwards.
The driver had two screens to look at: the instrument cluster was a screen and then was the infotainment unit, on top of the center console. It served also as the main command for other functions such as the climate control system. It also featured Android Auto and Apple CarPlay.

There was a wide choice of small engines and transmissions. Since more than 75% crossovers sold in Europe at that time were FWD vehicles, Citroen didn't bother to install an all-wheel-drive system on the Cactus. 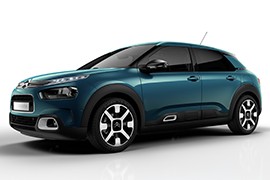