Citroen saw the rise of the crossover segment and prepared a modified regular, small-segment C3, and made it look like an offroad-wannabe vehicle.

Honda introduced the HR-V's first generation in 1998 and made people understand that they can drive on unpaved roads the same car they drove to their work and still get a decent fuel efficiency. The British carmaker Rover tried the same in 2003, but with minimal success. Then, Citroen introduced the C3 X-TR. It was a front-wheel-drive vehicle that promised a good ride on a country road and more confidence while parking in tight spots.

The French carmaker added black bumpers both front and rear and added a new set of side sills branded X-TR. As an innovative brand, Citroen installed a set of roof-rails, which the driver could install lengthwise or sideways. In the U.K, the car featured a standard panoramic glass roof, while the rest of the Europeans had to pay for it.

Inside, it was just a regular C3, but with fewer color options for upholstery. It featured flat seats at the front and a low center console. The center stack featured a silver aluminum trim made out of plastic, and the same went with the air vents.

Thanks to its higher ground clearance than the regular C3, the X-TR version offered more confidence when parking over a curb or passing through a flooded street. Those who used it in the winter appreciated the option for a limited-slip differential. 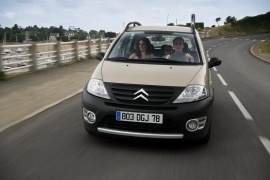