To expand its crossover range, Citroen has decided to give it a specific name: Aircross.

It was used for several vehicles and the C3 Aircross was one of them.

The C3 Aircross was a crossover based on the same platform with the super-mini C3. It was a direct competitor for the Renault Captur, the market leader in the segment. It was a replacement for the C3 Picasso as well. Since the minivan trend was dead, there was no need to continue that model.

From the outside, the C3 Aircross featured a striking look with a big bumper where the headlights were enclosed. The air intakes from the apron were found in the grille as on the interior as well. To enhance the “off-road” abilities, the car was fitted with black moldings on the wheel-arches. It was available with contrast-color roof rails.

Inside, the C3 Aircross looked different than most of the cars on the market. There was a shelf in the dash in the front of the front passenger. Some details on the air-vents resembled the same shape found on the front grille and an infotainment display was installed on the center stack. It looked like it was installed aftermarket, but it was original equipment. The instrument cluster featured two dials in square enclosures. In the back, there was room for two adults. The third one would have limited room. The trunk was big enough to carry a few folded bicycles.

For the engine compartment, Citroen offered a diesel and a gasoline unit, with different power levels. Apart from the base model, all of them were turbocharged. The standard transmission was a 5-speed manual and a 6-speed automatic was on the options list for selected engines. 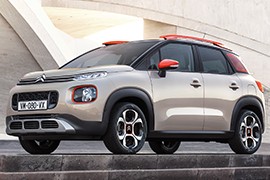