After four years on the market, the small-sized C3 received a well-deserved facelift that brought it essential upgrades and fixed some of the issues encountered on the 2009 model.

When Citroen launched the C3 in 2009, it did it during the world economic crisis and had to take a few cost-cutting measures. The result was an adequate vehicle for the price range it competed in. On the other hand, the French engineers knew that they could offer more, but the bean counters imposed their rules. By 2013, on the other hand, the market was already rising. Moreover, the Euro6 emission standards were due to enter in September 2014, and the non-facelifted version didn't comply.

There were significant changes at the front fascia that had received LED daytime running lights in the bumper, under the headlights, and above the foglamps' clusters. Moreover, a "smiling" lower grille complemented the upper one that was too slim to ensure the necessary amount of air needed to cool the engine. Another important upgrade was for the taillights, which were new and sported a chromed upper "eyebrow."

Unfortunately, Citroen couldn't upgrade the car's interior too much. It enhanced some materials, but basically, it was the same vehicle. On the other hand, it managed to offer as an option a new infotainment system that was fitted with a jack plug, apart from the Bluetooth connectivity and the USB slot.

Under the hood, Citroen introduced upgraded engines. The base version was still the 1.1-liter powerplant, but it offered 8 hp (8 PS) more than its predecessor. Moreover, the turbo-diesel versions were adapted for the Euro6 emission standards. 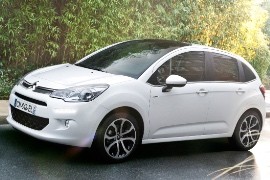