The second generation of the Citroen C3 was unveiled at the 2009 Frankfurt Motorshow. It was built on the same PF1 platform, used by the French group since 1998.

With a new design and new features, the second generation of the Citroen C3 appeared as a completely new car. But the reality was that it was a new shape on an old platform, and fitted with the engines from the previous generation of the C3.

From the outside, the curved look of the car looked appealing for most of its target customers. Its headlights were inspired by a boomerang and the grille was moved completely in the bumper and apron. As an option, the car was fitted with the “Zenith” windshield that was extended on the roof. In the back, the taillights featured the same boomerang style but reversed. To protect them from small bumps in parking lots, these were mounted upper.

Inside, the dashboard design continued the flowing-line theme from the outside. There was a choice of chrome and black trim and a choice of upholstery styles, including leather. In the instrument cluster, there were two dials and an LCD between them. Citroen dropped the coolant temperature dial and replaced it with a small lamp, which was blue when the engine was cold and red when it was too hot.

For the engine compartment, the 2009 C3 was fitted with the same “Prince” engine family developed together with BMW and re-named as PSA TU engines. The C3 was available with a choice of manual and automatic gearboxes. 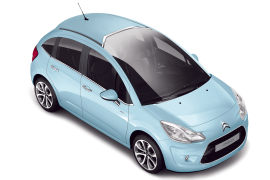