Following its tradition to have supermini vehicles in its lineup, the French carmaker prepared a successor for the five-door Saxo, overlapping it for a couple of years.

Citroen introduced the first generation of the C3 at the 2001 Frankfurt Motorshow, but its presence was shadowed by the 9/11 terrorist attack that happened during the press days of the motoring event. The car benefited from the second launch in December 2001 at the Bologna motor show and received more attention.

Its rounded shapes evoked the glorious past of the Citroen 2CV. The short front overhang and hood and the arched greenhouse were all part of the same theme. The carmaker chose not to make a three-door version for it, just like the 2 CV. At the front, the angular-shaped headlights and the slatted grille looked different than on its famous predecessor but followed the same rules. Its wrapped-around bumper sported black rubber strips, placed on the corners to avoid trading paint in parking. Citroen used other rubber strips on the doors for the same reason.

Inside, the car was surprisingly roomy for its size. Its arched roof allowed good headroom for all passengers, despite its high-mounted seats. The dashboard was created with curved lines, and the rounded instrument cluster featured a wide tachometer at the top while the speedometer was on a digital display in the middle of the instrument panel. Citroen installed an additional screen for the trip computer on the dashboard above the center stack.

Under the hood, the carmaker installed a wide engine choice, both gasoline, and turbo-diesel. All versions were paired to a five-speed manual, while selected versions were mated to an automated five-speed gearbox. 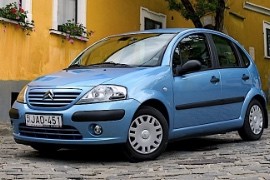