The BX was manufactured as a modern hatchback successor to the aging GS and GSA models.

The angular design was reminiscent of the Volvo Tundra concept, but the coincidence came from the fact that both cars were designed by Marcelo Gandini, who was the head of design at Bertone during the time. Benefiting from the Peugeot-Citroen merger in 1976, the BX shared many components with the Peugeot 405, but it was spiced up with Citroen's own technology: hydro-pneumatic self-leveling suspension, disc brakes all around and numerous plastic body panels. The 1986 facelift brought few changes, the white signals on the front being the only visual differences. 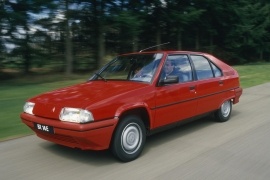