Citroen started working on the BX model in the '70s, but its bankruptcy put the project on hold until Peugeot bought the carmaker and financed it.

The car was designed to replace the GS model, which was on the market since 1970. Still, there was a disagreement regarding the exterior design, which calmed down after the carmaker bought the Volvo Tundra project from Bertone Studios. Volvo rejected it because it was considered too bold but fitted Citroen's needs like a glove. Despite its angular shapes, the hatchback featured a lower drag coefficient than the GS's, and its size matched the carmaker's needs. Moreover, its platform was cheaper than the one used for the GS. It featured McPherson struts at the front instead of double-wishbones. Still, it worked well together with the already famous hydropneumatic, self-leveling suspension system.

On the outside, it looked like the designers used only rulers and straight-angles to design the car. Its squared headlights with small, corner-mounted turn signals flanked the front of the hood, which was angled down. Citroen cooled the engine through a grille-mounted in the lower side of the wrapped-around plastic bumper. On the sides, the flush door handles and the flat body panels were completely different than the rounded shapes used by Citroen before. The raked-forward C-pillars and tailgate formed a Kammback styling at the back, while the taillights were also squared.

Inside, the French carmaker installed a squared-looking dashboard with flat panels. The instrument cluster featured most of the buttons mounted on the sides, including the turn-signal rocker-switcher, which had to be turned off by the driver. A one-spoke steering wheel was unusual for other carmakers, but not for Citroen, who used that system since the '50s. Thanks to the transverse-mounted engine, the car offered enough room for up to five passengers.

Under the hood, Citroen relied on Peugeot's engines with 1.4-liter and 1.6-liter displacements. Later on, the carmaker added more powerplants to the BX lineup. 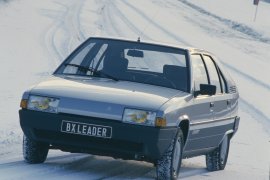