After five years since it was launched, the small Citroen AX received a facelift in 1991, trying to keep up with the latest design trends, and the receive worked well since it could stay on the market until 1998.

Peugeot managed to save Citroen after imposing some drastic measures. The new owner not only that it reduced the number of platforms used but also ditched the boxer engines. But that was not enough. Thus, it managed to create a small-sized vehicle called AX, which had to stay longer on the market to decrease the manufacturing costs per unit. But that wasn't possible just by using the same initial shape and engine range. Thus, in 1991, after the dismissal of the 2CV range, the AX remained the smallest Citroen on sale, and it had to attract some of its former sibling customers.

The facelifted version of the AX was available in a three- or five-door configuration. On the facelifted version, the car got rounded edges. Yet, the headlights, even though they looked more up-to-date thanks to the clear blinkers, remained angular-shaped. In this version, there were no exterior door handles. They were concealed in the B-pillar. To ensure proper ventilation, Citroen installed pop-out windows for the rear seats.

Inside, the new dashboard featured a smaller instrument cluster, which was also cheaper to produce. Yet the materials' quality was increased, thus creating a better, friendlier environment. At the back, the car provided just enough room for a couple of teenagers.

Under the hood, Citroen installed a wide choice of engines, similar to those on the five-door version. Yet, the three-door received a sportier version of the 1.4-liter powerplant, which offered more power. It was developed to be used on local, mono-brand races. 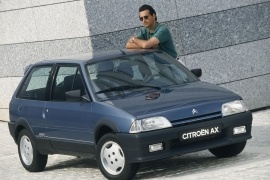