According to Citroen, the little AX might be considered the first supermini vehicle built by the "double-chevron" carmaker.

At the beginning of '80s, Citroen started to develop a vehicle to replace the aging Axel/Visa lineup. The three-door AX replaced the Axel, while the five-door replaced the Visa. With a new design based on a modified platform from its predecessor, the little French car started its 12 years career in 1986. It was light, agile, and highly fuel-efficient. A naturally aspirated diesel version of the AX earned its place in the Guinness World Book of Record with its 2.7 l/100 km (87.1 mpg-US) fuel consumption.

Despite its boxy look, the AX featured a stunning-low drag coefficient of just 0.31. Its headlights reflected the car's shape, and the turn-signals were mounted on the corners, so the carmaker didn't have to install an additional set on the sides. A special Rallye (or AX Sport) version was fitted with white steel wheels, which evoked the same design as for the successful Peugeot 205.

The interior design followed the same wedged shapes from the outside, with a dashboard that looked like it was made from vinyl-covered plywood. Apart from the steering wheel, everything else inside was made in straight lines and straight angles. To save weight, the car lacked sound-deadening materials and exposed metal parts here and there.

Citroen fitted the little AX 3-doors with a wide choice of engines ranged between 42 hp and 96 hp. The 1.4-liter diesel version was famous for its fuel efficiency and for its noisy running, but it was reliable and could run over 1000 miles (1609 km) on a tank. 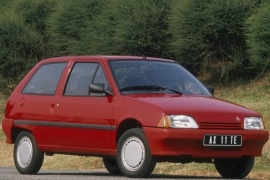