Chrysler introduced the fourth generation of the Town&Country minivan in January 2000 as a 2001 model and tried to give its Dodge Caravan an edge on the market to help it survive.

The MPV was also sold in Europe under the Chrysler Voyager nameplate, and it wasn't too well received due to its high appetite for fuel (either gasoline or diesel). In the U.S., on the other hand, the Grand Voyager was one of the best options for a seven-seater family vehicle.

With its raked front end with the hood almost continued by the windshield and the long, curved roofline, the Town&Country featured a dynamic design even though it wasn't built for speed. Its sliding rear doors allowed passengers to easily get in or out of the vehicle. Last but not least, aerodynamics played a crucial role in fuel efficiency, which was good for the American standards, but awful for the Europeans.

Chrysler built the Town&Country in three trim levels, starting with the LX, continuing with the LXi, and the range-topper Limited. For those who asked for more comfort and didn't need seven seats, the automaker offered a version with captain chairs in the middle row. Nevertheless, removing all the seats behind the first row transformed the MPV into an excellent hauler to move kids to college. On the options list, Chrysler added ceiling-mounted screens and a DVD player to entertain the kids in the back on long trips.

Under the hood, the Town&Country featured a 2.4-liter four-banger as a starting point, while the other option was a 3.3-liter V6. The former was available on selected markets with a five-speed manual. Chrysler offered a four-speed automatic as an option for the inline-four but fitted it as standard on the V6. Later on, the automaker replaced the 3.3-liter unit with a 3.8-liter powerplant. 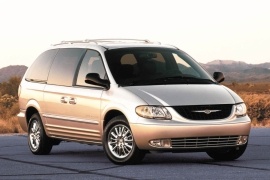