It was a bad time for the worldwide car industry, but no one knew that, yet, in 2006 when the facelift was introduced to the market. Those were times for blooming. The global economy looked well, but everything crashed in 2007, along with the world financial crisis that brought more carmakers to the brink of bankruptcy, and car models were wiped out from the assembly lines.

The facelifted version of the PT Cruiser convertible sported a new front fascia design with a double-arched lower line for the headlights. It resembled the same cues as some Mercedes-Benz models. In those times, worth mention it, it was Daimler-Chrysler, a marriage that lasted less than anyone imagined. Its wider fenders, both front, and rear were kept since they made a good impression on the market thanks to the vehicle's overall retro-design look.

Inside, the three-dials design sported two gauges on the left, the speedometer in the middle, and the tachometer on the right. Depending on the option, the PT Cruiser Convertible featured a radio-cassette player or a CD-Player sold as a premium sound system. The design team couldn't find a better solution for the rag-top when it was retracted, and it was still left behind the rear seats, exposed to the air.

Depending on the market, Chrysler offered the PT Cruiser with a choice of gasoline or diesel engines. The European customers preferred the latter. For the U.S. market, the carmaker provided a 2.4-liter inline-four engine with or without a turbocharger. 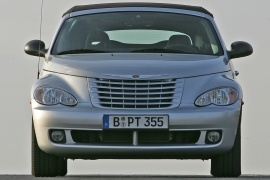