When it was launched in 2001, the PT Cruiser was everybody's shopping list and customers paid thousands of dollars over the sticker price to get one.

In 2006, that didn't happen anymore so the Chrysler launched a mid-life cycle refresh.

The main advantage of the vehicle was its retro-modern look. With its high greenhouse and rounded hood, it resembled the styling of the '50s era. The dashboard looked like it was taken from an old family van with its round analog dials. But the modern touches were there, with LED matrix displays, like on an old computer.

For the 2006 model, the headlights were reshaped and the styling got smoother. The whole front and rear fascia were redesigned, as well as new wheel designs. But it was the same look that made customers storm the dealer's doors back in 2001.

The refreshes interior brought a new instrument cluster and a new door panel. The Limited and GT get a six-way power driver seat this year, and all models receive upgraded sound insulation. For the sound system, all the trim levels were upgraded, and, on top of that, a 368-watt Boston Acoustics premium audio was available.

For the drivetrain, the biggest improvement was for the turbo version. While the 2001 model featured a 180 hp unit, the 2006 model has received an additional 50 hp. The vehicle didn't offer standard ABS for all of its range. It was available for the GT and Limited trim levels. Another disappointment was the lack of a good rear suspension. The PT Cruiser didn't take only the look from the '50s. It also took a steel beam rear axle even if it was front-wheel-drive. 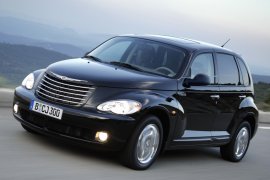