The name is not new though, it was used during the DaimlerChrysler alliance for an SUV.

The MPV market in the U.S. is big and important. It is also an area where the European brands' are mostly non-existent and the Japanese car-makers are struggling to keep up. It is the place where Chrysler could offer a new car with a lot of background experience.

The design was more fluid than the angular-shaped Town&Country. Its flowing lines on the grille and headlights were extended to the sides and in the rear. The sliding doors were fitted as standard and with its wide windows, it offered an exclusive view on the road.

Inside, was where the 2017 Pacifica really shined. It's Stow 'n Go middle seat rows and the removable rear seat rows, it could be transformed from a family minivan into a light utility vehicle in under a minute. Depending on the trim level, it featured up to seven seats. The Stow 'n Go system was not available for the hybrid version since that one had the batteries under the floor. It was offered even with an integrated vacuum cleaning system, located in the C-pillar trim area.

The 2017 Pacifica featured an all-wheel independent suspension, which was good for comfort. There was only one engine option, the 3.6-liter V6 unit. It was offered either as a stand-alone power unit or as a plug-in hybrid with a 16 kW Li-ion battery that ensured up to 53 km (33 miles) of electric autonomy. 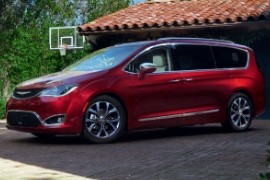 2 This 1955 Chrysler New Yorker Was Once Harry Truman's Daily Drive, Could Be Yours

3 First and Second-Gen Chrysler Sebring Drop-Tops Need More Love, but the Third Was a Dud

4 Chrysler Newport Phaeton: An Open-Top Special Edition From Back When Chrysler Was Awesome