Part SUV and part minivan, the Uplander was a special cross-over vehicle that mixed a 4x4 with an MPV.

The result was a good recreational vehicle equipped with ah option for an all-wheel-drive system.

The Uplander was not the most successful story in GM history. It lived for only three years and despite its good intentions, it was sold in a very small number when compared with the high hopes of its parents.

For the Uplander, GM used an evolution of the U-body platform. It was the same used for the Pontiac Aztek which, surprisingly, was sold in higher numbers than the Uplander. It featured a simple, somehow dull, exterior appearance, with a classic MPV styling and sliding doors in the rear. The big tailgate in the back could have been used as an umbrella since it was big enough to host a small gathering underneath.

Inside, the Uplander was available with up to seven seats. The rear bench could have been split into 60/40 ratios and extend the trunk space or use it as a tent. The dashboard was inspired by a regular sedan, with a rounded instrument cluster and four dials inside. The steering-column mounted gear-selector allowed free passage from left to right, with the seats moved back.

The Uplander was offered with a choice of two V6 engines mated to a 4-speed automatic transmission. For a 2005 model-year vehicle, that was outdated. There was a so-called “Hybrid” version, which could have run with both gasoline and ethanol. It wasn't a true, electric-gasoline hybrid. The all-wheel-drive traction system was offered only in 2005 and 2006. 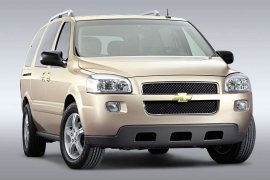 1 New Chevy Nomad Wants to Join the Electric Party, Does It Have Your Approval?