1 2023 Chevy Montana Gets a Trailblazer Makeover, Cue the Santa Cruz and Maverick LOLs

The 2009 Chevrolet Cruze sedan was introduced at the 2009 Paris Motor Show. The vehicle appeared on the market during the world financial crisis and it was a mix of good technology at an affordable price.

After GM took over the Daewoo actives, it also took some of its platforms and dealer networks across Europe. In Europe, Daewoo started to open the market for affordable sedans and hatchbacks with the Lacetti model. Chevrolet launched the Cruze, to fill the gap. Unfortunately, the timing was bad. But the car was a decent choice for the buyers.

The Cruze carried Chevy's gold bowtie. It was flanked by distinctive headlamp housings, with 'jewel-effect' detailing, that sweep up, arrow-like, to a point in the front fenders. An arched roofline extended from the raked windshield into the slim rear pillars. It defined the exterior of the Cruze. In the rear, the car ended into a relatively short rear deck.

The core interior design theme was a modern expression of a traditional Chevy styling cue - the signature 'twin cockpit' layout of the Corvette, with “cocoon-like” seats in the front. On each side of the main fascia, there was a choice of colored fabric or grained vinyl panels. The center console featured the infotainment and air conditioning displays and controls. It was mounted at a shallow angle and had a flowing, free form which eliminated straight lines and the traditional 'picture framing' of panels.

For the engine compartment, a variety of diesel and gasoline units were installed. It was available with 5 or 6-speed manual, depending on the engine, and an option for 6-speed automatic for selected models. 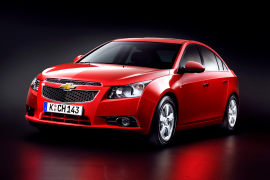