By 1967, the Corvette was already a respected name on the market, and all it needed was a bump in the design.

General Motors appointed Larry Shinoda to design the car under Bill Mitchell's supervision. Even though the sports car relied on the same chassis as its predecessor, there were many upgrades that transformed the longest-running version of the Corvette ever, being produced between 1967 and 1982.

The idea of a plastic bodywork was kept, and the design resembled the one offered by the Mako Shark II concept car but with softer edges. Its V-shaped nose and the pop-up headlights were part of the Corvette package, inherited from its predecessor. Since it was built as a sports car, it featured two doors and no rear side windows. Unlike the Corvette C2, it featured a vertical back windscreen instead of a sloped one.

Inside, the carmaker installed low-mounted sport bucket seats separated by a tall center console where Chevrolet placed the hand-brake. Since it was more of a luxury car than a sports coupe, it featured a center stack where GM arranged the audio controls and the ventilation dials. The dashboard was sloped toward the car's occupants.

Under the hood, Chevrolet installed a choice of engines ranging from a 5.0-liter V8 up to the massive, 427 (7.0-liter) powerplant reserved for the special versions such as the track-focused L88. Depending on the version and model year, the C3 was available with either a three-speed manual, a four-speed manual, or the famous Turbo Hydramatic transmission. 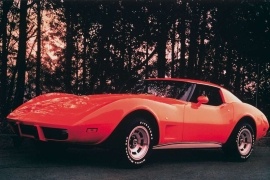