After three years since the first Corvette hit the market, GM struggled to find customers for its sports car and tried to make it more appealing.

Chevrolet looked like a chef who knew the ingredients but couldn't find the right recipe to make the C1 good enough for its customers. But its competitors didn't make things easier for the bow-tie brand. Ford, Studebaker, Jaguar, Austin-Halley and AMC aimed at the same market segment. In 1956, Chevrolet decided to push harder on the market with a slightly revised version.

First of all, the management understood that the fin-tails were not meant to be installed on a sports car and deleted them. Thus, the C1 received a rounded rear end, closer to the British roadsters styling. Also, they noticed that the headlights and the front fenders didn't look that impressive and that's how the side-vents appeared on the 1956 Corvette, along with the classic round headlights in chromed rings. The customers didn't complain about the grille, though, so GM didn't change it.

In the summer of '56, GM introduced the car to selected dealers and soon received a few negative feedbacks from its customers. There was not enough interior room, especially for six-footers (1.82m). With the top up, they barely had any headroom left. On the plus side, everyone praised the electrically-operated rag-top that could open and closed in a matter of seconds without leaving the vehicle.

Under the hood, there was still a debate either if they should go with the newly developed fuel-injection system or stick to the good old carburetor. The odds decided to go with the latter solution while the former was on the options list. Another good point for the Corvette was the PowerGlide automatic gearbox offered as an option for the four-speed manual transmission. 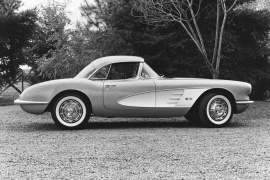 2 Parked for 28 Years: 1966 Chevrolet Impala SS Hides a Little Surprise Under the Hood