The 2017 Camaro ZL1 wasn't a wolf in sheepskin but more like a cheetah under a wolf skin.

It was a performance to match some supercars but it looked just like a coupe.

In the world of pony-cars, the Camaro had its place and its retro-design was a hit from the moment it showed up on the market with its first generation in 2010. But the second generation with the ZL1 version was a true-blood sports car.

From the outside, there were not too many features that could tell the difference. But a second look will show some attention to the aerodynamic details. The car had been tested over 100 hours in the wind-tunnel to adjust the already aerodynamic shape of the Camaro. There was a new hood, with carbon fiber inserts and heat extractors and additional changes that included a larger front splitter, wider front fenders, and a wing-style rear spoiler.

Since the car was designed for high-speed, the interior was fitted accordingly. It featured Recaro sport-bucket seats with great lateral support. The infotainment unit received new features that could record a lap not only as a graphic but as a video through the on-board camera. When the car was in race-mode and the manual program for the transmission was engaged, a shift-light would be shown on the head-up display.

But there is no doubt that the most important part was under the hood. A 6.2-liter supercharged engine offered 640 hp. It was mated to a standard 6-speed manual transmission or, as an option a 10-speed automatic, which was jointly developed with Ford. And the final result was a serious, fast car. And unlike some muscle-cars, the Camaro could turn and turn fast. 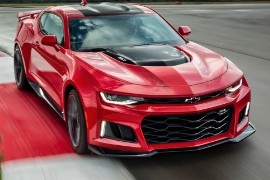