The fourth generation of the Camaro was one of the most underappreciated cars on the market, even though it was an undercover Corvette.

With an LT1 engine under the hood and subtle details, the Z28 was the car that could stun and embarrass a Mustang owner before it could spell its car's name. Moreover, it was available as a coupe for the hard-core drivers or as a convertible for those who preferred a relaxed but spirited driving style.

Chevrolet changed the Camaro's look and installed a new set of headlights that were not buried under the hood. Now they were wider, rounder, more obvious. Its front grille was enlarged and reshaped. It didn't look as sharp as before, but make no mistake: it was still a hidden gem of a sports car.

Chevrolet installed a dual-color upholstery on the bucket-seat with high bolstering for the Z28 version. A new, six-speed manual gearbox was fitted as standard. The bucket seats in the back were deep, and, in theory, they allowed a couple of friends to join the drive. But in reality, there was practically zero legroom if the driver was taller than 6 ft (1.80 m).

Under the hood, Chevrolet installed the LT4 engine. It was the same, old, 5.7-liter V-8 from the Corvette, but with less power. That didn't mean that it wasn't an excellent choice for the aftermarket business and tuning companies. 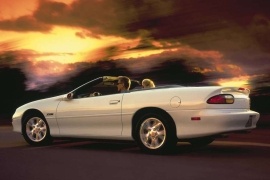