While the Camaro SS was the most feared version by its competitors, the Z28 was the underdog that ripped-off the heads of Mustang owners before they knew what hit them.

Even though the Z28 was not the most potent in its lineup, it was just ten ponies shy of its Super Sport brother. In straight-line acceleration, that didn't matter that much. True, the SS was better on a road-course, but for the quarter-mile run, that was less important. For the hard-core Chevy fans, the Z28 resembled the glorious second-generation Camaro that was faster than its more powerful sibling, thanks to its lighter engine. For the 1997 model, that was irrelevant since both models shared the same small-block LT1 engine.

From the outside, the Z28 featured the new headlights design with an ovoid-shaped, twin-lamps system and the turn-signals mounted lower into the bumper. The European version suffered due to the mandatory use of a front license plate, while the Americans enjoyed the view of a mouth-shaped grille.

Inside, Chevrolet installed sport bucket-seats at the front and a small bench in the rear. The dashboard was centered around the driver, with a tilted center stack. Between the front seats, a tall center console filled the space with a storage compartment, the handbrake, and the gear-stick.

Under the hood, the 5.7-liter LT1 engine provided 315 hp, ten less than the SS version. But that wasn't a problem since the LT1 was one of the easiest to tune and upgrade V-8s on the market. The engineers paired the engine with a 5-speed manual. 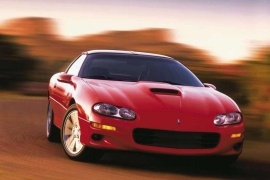 1 This 1964 Chevrolet Impala Is an Untouched Barn Find, Hides a Little Surprise Inside