The Muscle Car Era was at its peak when Chevrolet introduced the first-gen Camaro.

It was built to fight against the Mustang, a battle that continued throughout generations.

It was clear from the start that the closed versions were preferred for drag-racing and to be modified. But for joy-ride, the Camaro Convertible SS was the one who got the aces.

With its hideaway headlights and the chromed SS badge in the middle of the black grille, the Camaro Convertible Super Sport was an eye-catcher. The fenders' flowing lines, the power-domes on the hood, and the arched rear quarter panels were distinctive elements for the vehicle. All four windows could have been opened, leaving nothing to stop the wind apart from the windshield. The '67 model featured flat caps on the wheels, while the later models featured taller ones.

Inside, there were two bucket seats for the front occupants and a bench in the rear. A nice design detail about the Camaro was that everything was placed under the dash-panel line. The instrument cluster with its two round dials, the center stack, and the floor-mounted gear-selector was all part of a new car-design culture. It was a design trend that said that from the side, the only visible thing should be the occupants and maybe the top side of the steering wheel.

Under the hood, the car was fitted with a 5.7-liter (the famous 350 engine) that produced at least 300 hp. The Camaro Convertible SS was available with either a 4-speed manual or a 3-speed auto. 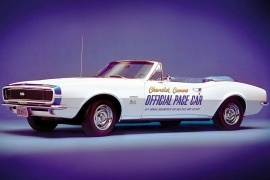 4 This 1964 Chevrolet Impala Is an Untouched Barn Find, Hides a Little Surprise Inside