The muscle-car era was close to its end, and General Motors knew it, but it still didn't want to give up and produced a few models that could still shred their tires on the drag-strips, and not only there.

After introducing the second generation of the Camaro, it understood that it had to make its nameplate live a the same heights as its predecessor. Thus, it was almost mandatory to offer an SS version for this pony car, even though it couldn't provide it for more than a year. There were higher insurance costs and, moreover, there were new upcoming emission rules that could prevent carmakers from providing high-powered vehicles for anybody.

Featuring an almost identical shape to its siblings, the SS version of the Camaro was the sportier version. It featured a black mesh grille behind the slim bumper supported by two struts. An SS badge adorned it. The round headlights were complemented by the parking lights and the blinkers mounted under the bumper. Lower, a black apron limited the air going under the vehicle. At the back, an integrated spoiler completed the car's sporty image.

Inside, the carmaker offered a pair of black, vinyl-covered bucket seats at the front. The dashboard showed a six-dial layout, with the speedometer and the tachometer separated by the automatic-transmission indicator.

Under the hood, the 396 powerplant was a far cry from its predecessors. Due to the new measuring systems and the stricter emission regulations, the V8 engine produced an advertised 400 horses. As an option, Chevrolet also offered a 347 unit that provided 300 ponies. 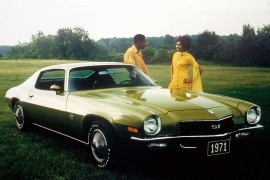