GM decided to punch the Mustangs and the Challengers hard and introduced the SS version for the Camaro in 2010 and, from the quarter-mile times, it did.

There was a new muscle-car war going between the Big-Three from Detroit. The Chevrolet design department did an excellent job by taking the classic '69 Camaro and transformed it into a new vehicle. The retro-style design worked well, and soon the market was flooded by V-6 Camaros roaring around streets everywhere. But the pure petrolheads had to wait longer for the SS version.

While the marketing department did a great job by promoting the Camaro into the Transformers movie, but the true confirmation of the car's performance was the LS3-powered Camaro SS. The design department added an air-intake on the high-lifted hood and a wider lower grille in the bumper when compared to the V-6 version. A set of stripes was available, but the 19" wheels were standard. In the back, the carmaker installed a wider splitter between the two round exhausts.

Inside, Chevrolet installed nice leather seats fitted as standard and a premium Boston Acoustic sound system. But the cheap plastic used for the doors, dashboard, and center console spoiled the car's look. The retro-design used for the dials and gauges might have been looked better if they were not made with such cheap materials.

GM considered that the platform would be the winning combination and will attract the most buyers. For that, it offered the SS in two versions: manual and automatic. A 426 hp LS3 engine powered the former, while the latter featured a 400 hp L99 unit. For the automatic transmission, Chevrolet opted for an Aisin six-speed gearbox. Both versions featured independent suspension in all corners and upgraded Brembo brakes with four pistons at the front. 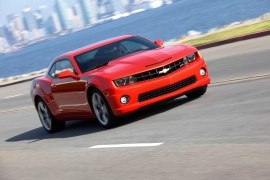