In September 1966, Chevrolet introduced the Camaro lineup in its dealership network.

All of a sudden, the Mustang was not alone on the market: its contender arrived.

The battle between the Camaro and the Mustang was one of the most beautiful stories from American motoring history. Ford raised the bar in 1964, and Chevrolet answered two years later with a pony/muscle-car that didn't need a fastback version to look good. The bow-tie brand released the Camaro with a base engine that offered just 140 hp, and that was a big commercial success. Chevrolet offered the SuperSport version, or SS, as it was better known for those who asked for more power.

At the front, the '67 Camaro's front end wasn't that pined out as for the later models, and the grille was rectangular. Its two round headlights were accompanied by a set of fog lights on the grille's inner side. Last but not least, a chromed SS badge took center stage of the black grille. Unlike the models built after 1969, the 1967-1969 Camaro SS featured triangular windows on the front side of its doors. That detail was changed afterward.

Inside, there was a pair of bucket seats at the front and a regular bench in the rear. The L48 Camaro SS was offered with plenty of interior options, including a roll-cage. What was not available was the power-windows.

Under the hood, Chevrolet installed a 350 CID (5.7-liter) V8 engine. It offered almost 300 hp with a single, four-barrel carburetor. But there were so many aftermarket solutions that could easily break the 400 hp barrier, and that's what made the Camaro SS so much of a sought after. 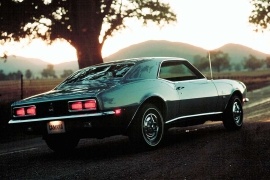