The Camaro L30 was the original sleeper vehicle among its brothers, featuring similar, if not higher, performances, while its exterior didn't show it with special badges or flashy designs.

In 1967, Chevrolet introduced a unique version for the Camaro, the L30. While it resembled its SS cousin, it didn't sport any specific badge, but since it featured similar exterior packages, they were often confused. Moreover, the Chevrolet ad campaign created even more confusion between the SS and the L30. Last but not least, the two versions offered similar performances.

An L30 model looked could easily be mistaken with an SS-350 model stripped of ornamentation. A white strip adorned the front side of the car, surrounding the hood and front fenders. It was interrupted on the sides by the 327 letterings, showing the engine's displacement. It was sometimes called an SS-327, but the SS was built exclusively with the 350 engine. The grille featured the same round headlights as the rest of the range and the turn signals mounted towards the car's center, but without any badge in the middle. At the back, Chevrolet installed a dual exhaust with a crossflow muffler and side-mounted pipes.

The L30 featured a four-speed manual transmission with positraction (limited-slip differential). Due to the four-speed manual gearbox, the Camaro L30 was also known as L30/M20, where the M20 represented the gearbox. In 1967, the Camaro L30 featured a ten-bolt rear axle, but the carmaker changed it to a 12-bolt one in March. Chevrolet built a total of 10,654 L30/M20 Coupe and 1,202 L30/M20 Convertibles during its two-year production times in 1967 and 1968. 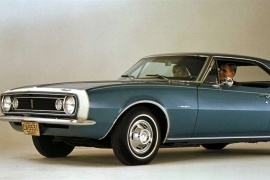