Already at the fifth generation, the 2009 Chevrolet Camaro had a muscular, retro design.

While the first Camaro was introduced back in 1967 as the Chevrolet’s response to the Ford Mustang, the same happened with the 2009 model.

With the Mustang having great success, GM unveiled the concept Camaro to study the customer’s reactions and determine if it was time for a new series. 8 months after releasing the concept car, the official version was announced.

An excellent performance car, the Camaro came with a V6 or a more powerful V8 engine. The V6 unit could sprint the Camaro to 100 kph in around 6 seconds, while the V8 5 seconds.

Based on a shortened and reworked version of the GM’s Zeta platform, the Camaro was equipped with an independent rear suspension and a refined handling.

While the first three were equipped with the V6 engine, the 1SS and the 2SS had the standard V8 powerplant.

Even the base model was well equipped with 18-inch black steel wheels, keyless entry, cloth upholstery, air-conditioning, cruise control and others.

Other packages were available to enhance comfort, connectivity and luxury. 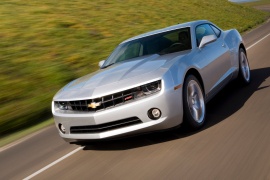