The Camaro's fourth-generation might be one of the most underappreciated generations from its entire nameplate existence.

Nevertheless, it was a daily pony car.

General Motors didn't want to lose the market share and hoped that a new Camaro would keep customers coming into Chevrolet's showrooms. It didn't work that well, but the car was better than most of its detractors pictured it. First of all, it was built on top of the F-Platform and featured a good balance between performance and day-to-day usability. Also, it was offered with engines for everyone's pockets.

The Camaro shared the sleek and aerodynamic look with its sibling, the Pontiac Firebird. Its sharp nose and buried headlights were unique on the market. It was only after the 1998 facelift when the car went through a facelift and received a more regular look for its lights. But the overall shape remained unchanged for the entire generation, with a very raked windshield, a short roof, and a big, sloped rear window. A short deck-lid behind completed the Camaro's sporty look.

Inside, the carmaker installed low bucket seats at the front and a small bench for two in the back, which was more often used as a trunk than to carry people. There was no headroom in there, and the legroom was limited if the front occupants were average-sized adults. For the instrument cluster, Chevrolet installed two wide dials for the speedometer and tachometer. On their right side, the engineers placed a digital odometer on an amber-lit LCD.

Apart from the special models, such as the Z28 or the SuperSport, the Camaro featured a choice of two V-6 engines paired to a standard 5-speed manual, while a 4-speed automatic was on the options list. 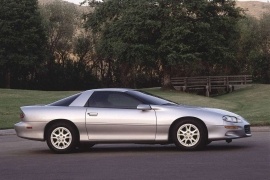