While the Corvette stole all the attention for its performance figures, the Camaro was the unsung hero that could offer similar performances, with the right engine in it.

GM introduced the third generation of the Camaro in 1982 to answer Ford's Mustang introduced just a few years earlier. The oil crisis was still alive in customers' minds, and the fear for another one was still present. Thus, the bow-tie brand offered the Camaro as a sporty-looking vehicle but with fuel-efficient engines. It was Chevrolet's pony-car.

Sleek, with a truly sporty look, the Camaro conquered the hearts of its customers. Even though it shared the same platform with the Pontiac Camaro, it had that something extra that made it more appealing. Maybe the dual, squared headlights or the huge curved windscreen in the back were some of the reasons why it was so attractive. Its long, frameless doors and the big taillights enhanced the sporty look of the car.

Inside, the front bucket seats covered in fabric offered good side support and comfort. Its flat, straight dash panel sported two vents in the middle and an integrated instrument panel in front of the driver. Chevrolet installed the vents controls on the upper side and the stereo on the lower area, just above the center console. The Camaro featured two seats in the back where someone could hardly crawl in and out, not to mention for how long could sit in there.

Under the hood, GM was focused more on fuel-efficient vehicles and installed a 2.5-liter inline-four paired to a four-speed manual for the base version. Chevrolet replaced the older, leaf-spring suspension with a new one, with coils in all corners. Thus, the Camaro became one of the best handling cars in its segment. 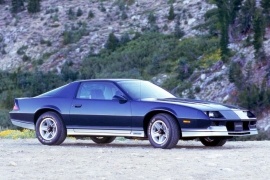 4 Two Equally Priced Drop-Tops Are at the Same Dealership, Which Are You Taking Home?