Chevrolet introduced the second generation of the Camaro in 1970, and it changed the paradigm, going for a lighter vehicle rather than for bigger engines.

Even though the CAFE agreement and the new pollution regulations were not implemented yet, Chevrolet voluntarily decreased its engines' displacement. A lighter small-block led to a better handling car and, if developed with similar power output, led to a faster vehicle.

GM design department took its inspiration from the European sports cars for the second Camaro generation and designed the vehicle with a long, sloped rear window and short trunk. Depending on the trim level, the carmaker installed a rear spoiler. At the front, the pinned-out front fascia and the round headlights in squared casings looked way different than the one installed on its predecessor.

Inside, the Camaro featured sport bucket-seats mounted low on the floor to amplify the sporty sensation. The dashboard was rounded and featured a curved instrument cluster centered around the driver. On the center stack, the carmaker placed the optional radio. There was less room for the rear passengers, but the carmaker noticed that those were rarely used by anyone.

Chevrolet installed a wide range of engines that provided between 117 hp and 250 hp under the hood. GM developed a particular version, the Z28, that offered more power from the LT1, 5.7-liter engine that proved to be more powerful in real life than on paper. 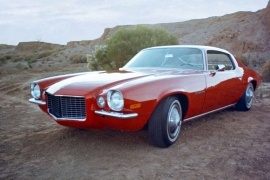