4 Caterham Turns the Seven Into a Kei Car, Gives It Tiny 660cc Engine

5 Want to Become a Racing Driver? Caterham's Academy Package Is The Way to Go

The Caterham 2013 base model was the 160 model, which didn't feature a four-cylinder engine, but a turbocharged motorcycle three-cylinder unit.

If someone would like to have a car built for trackdays, it could look no further than the Caterham Seven 160. It was precisely what Collin Chapman ever wanted with the Lotus Seven: a light, nimble roadster that could use the low weight to compensate for the low power.

For starters, Caterham sold the base model with bodywork and steel-wheels. The windscreen, the doors, and the canvas-top were on the options list. It sold the car either in a kit to be assembled by the new owner or delivered as a complete vehicle and charged more for it.

The cabin was hardly named "interior" since it was completely open in the base version. But while there was no problem to buy and install the side panels and the roof after the customer bought the car, the heater had to be ordered before. Yes, that was on the options list. Forget about any kind of luxury in that Caterham. It was as comfortable as a wooden bench in the park. Just add some pouring rain, and you'll get the real picture.

Under the long hood was a Suzuki turbocharged engine that provided 80 hp, which was translated into a 160 hp/tone since the empty vehicle weight was 500 kilos (1080 lbs). An open rear differential was fitted as standard, and that prevent the car from drifting too much. 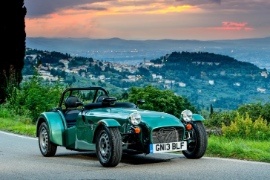