5 Caterham Turns the Seven Into a Kei Car, Gives It Tiny 660cc Engine

Caterham was the only car manufacturer that bought the rights to build the Lotus Seven and improved it over the years. It was an ultimate roadster/toy/track-day weapon.

Collin Chapman designed the Lotus Seven in the '50s, and it was the quintessence of a road-legal race-car. Many cars pretended to be race-cars with number plates, but none of them could be what the Seven was. The British engineer had one goal: to mount an engine into a car that was as light as possible. Graham Nearm, a former Lotus dealer, bought Lotus's rights and built the Seven after the carmaker dropped the roadster from its lineup.

The construction was simple: a set of aluminum panels attached to a tubular steel chassis. The exposed suspension struts and the separate fenders were typical for Caterham vehicles, while its round headlights were attached to the bodywork via chromed mounts. Like the original model, the little roadster featured a straight windshield and a small cabin big enough to fit two occupants separated by the tall center tunnel. Behind them, there was only the rear axle and a vertical panel.

It is hard to say about the Caterham that it had an interior. It was just a place with two seats, a dash panel, and a steering wheel. A few buttons and switches were installed for lights, wipers, and a hazard button. The bucket-seats were designed to hold their occupants in place while hard cornering since the Caterham was known for its high-speed cornering abilities.

Under the hood, there was an inline-four engine that sent its power to the rear wheels. Despite its low power, it could rocket the car to 100 kph (62 mph) in under seven seconds. 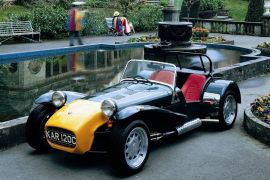